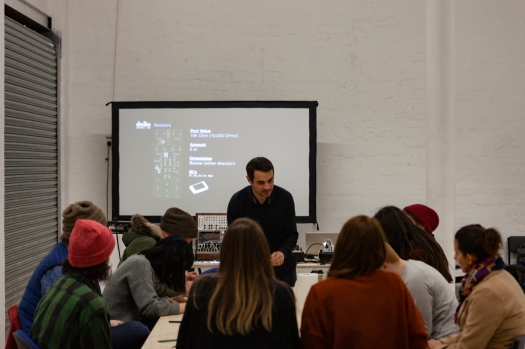 This DIY workshop will provide hands on experience with building your very own modular synthesis oscillator module, which you can take home at the end.

John is an avid synth enthusiast and Electronic Engineer for Delta Sound Labs, with some sixteen years experience in Audio Electronics.

Participants will be guided through the process of building their very own CEM3340 based eurorack oscillator (VCO) module. The CEM3340 VCO is nothing short of a classic integrated circuit, an oscillator on a chip so to speak, recently re-released putting this amazing device back into the hands of DIY synthesists.

And we’re glad it is! This particular IC has been the driving force behind many of the classic synthesisers of old including the Sequential Pro One, Sequential Prophet 5 Rev.3, Sequential Prophet T8, Moog Memorymoog, Oberheim OBXa, Roland SH-101 and Roland MKS-80 amongst others. More recently it has become the main oscillator source for the polyphonic ‘Deckards Dream’ synthesiser, a device somewhat inspired by the behemoth that is/was the Yamaha CS80.

John’s incarnation of the oscillator design is closely aligned to the design found in the Sequential Pro One, with some personal touches of course.

1:00 PM – 2:30 PM > Analog On provides an introduction to modular synths and Eurorack systems

2:45 PM – 3:45 PM > Nordl3 provides a hands on introduction to modular synthesis on his home made techno system

4:00 PM – 4:30 PM >  Ben Allen  provides a hands on demo of the TENORI-ON and is joined by Conrad Gibbons on some very interesting synths.

Cost: Free… and you can drop in any time for some excellent music, performances, demos and make sure to check out the amazing Yellow Yard and Abbazappa Record Shop

Abbazappa Records is busting with all-sorts of of pre-loved and new vinyl, from across a wide variety of genres and periods.  Not only that; the shop stocks all-sorts of turntables, tape machines, music clothing and more.  It’s a crate diggers paradise! Son Zept hails from Belfast.  His musical style is an electronic genre deconstruction, with ambient, IDM and electroacoustic sensibilities.

His debut EP was released on Reset Records last year and it was one of the best things we heard in quite a long time.  A 40-minute exploration of musical and sonic aspects found in techno, noise, footwork, trance, power-ambient, and industrial.

We’re delighted to confirm that Son Zept will be playing an extended live set at this years festival, which we are extremely excited about.

The Fully Automatic Model is Derry based native Jonny Delaney.   For the past 18 years, Jonny has been involved with participating and growing the electronic music scene in the city, by helping to organise festivals, record labels, music academies and record shops.

Two years ago, The Fully Automatic Model formed as a byproduct of  the above as well as years of producing music, mixing and teaching music technology, synthesis and modular synth building.

A series of original ethereal soundscapes. This album is a peaceful yet evoking sonic journey into ambient and experimental electronica.

The Crimson Underground as a true master of his art and is non compromising in his musical direction.  His abstract, leftfield and contemporary electronic music has been described as being dark with an underlying beauty.

His career spans twenty years and has seen his music feature on a multitude of underground electronic labels, television and radio.

TCU’s live performances are not to be missed and we are delighted to have him at this years festival.

Vinma Inc. is a new collaboration by two modular synthesists.

John Harding and Gareth Johnston, share a fundamental passion for analog and vintage synthesisers and recording devices. Vilma inc. is a recent pairing of these two likeminded gear nerds, exploring sonic landscapes that oscillate somewhere between the classic synth sounds of the 70’s and 80’s, and more modern ambient electronica.

Vilma inc. make extensive use of their collection of rare and obscure recording media and devices which drive and inspire their productions in this debut outing. Tape saturated textures are intertwined with overdriven percussion, analog synths, guitar effects pedals and hardware samplers. Expect sounds that are reminiscent of Boards of Canada, Four Tet and Legowelt.

John Harding is key figure in the Eurorack and modular synth community in the city and further afield.  He co-founded Delta Sound Labs , which  is an audio technology company based in the United States.

Joe O’ Hagan is a musician that is heavily influenced by electronica, electronics and instrument design.  He uses hardware to create a varied selection of music from ambient to IDM to techno.

Over the past two years, Joe successfully self released his debut EP,  produced music alongside the Ulster Orchestra and Phil Kieran.

Vincent O’Callaghan make up part of the Distorted Perspective collective, which is a group of like-minded individuals who run an alternative music and art festival, celebrating contemporary sound, psych and avant-garde art, in Letterkenny, Co. Donegal.

Vincent has been collecting and spinning music for over 15 years, so his sets are versatile and well tuned.  Expect anything from Techno to Ambient,  Ethereal to dark electronica, past to present to future gems.

Derry based visual artist F12 has been providing visual delights for the past 19+ years.  We’re delighted to have him onboard for all of the main events at this years festival.  Additional visuals by Vincent O’Callaghan.

Information above subject to change